Board of Education approves going forward with Plan B 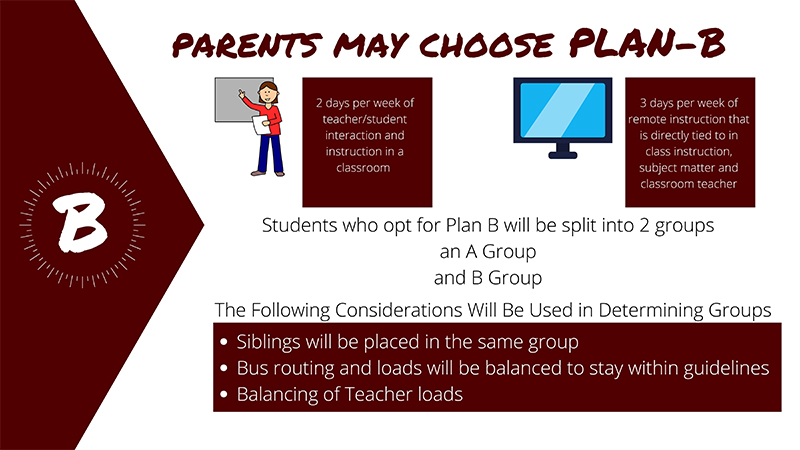 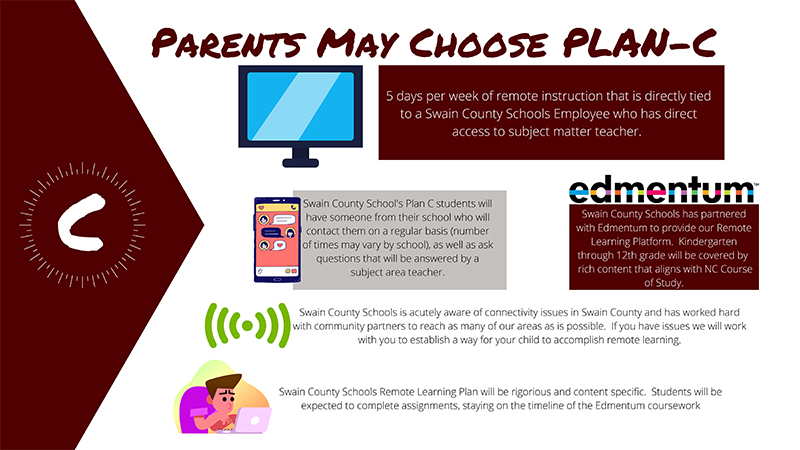 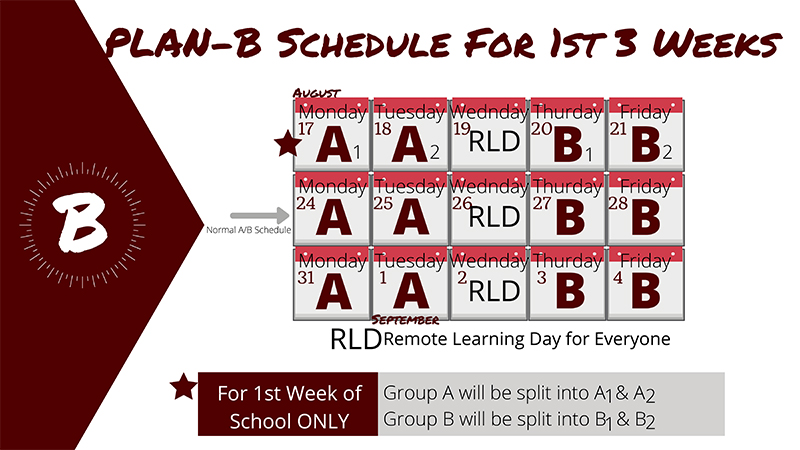 The Swain County Board of Education narrowly passed going forward with Plan B, in a 3-2 decision, with Lambert Wilson and Kim Carpenter voting against the measure at the board's special called meeting Thursday, July 23. Plan B is the hybrid format, which will allow students to be on campus two days a week and have remote learning the other three days. The board also discussed some of their procedures and concerns for the fall semester.

Superintendent Mark Sale presented the plan to reopen to the school board and began by discussing the two options for students, Plan B, which is the hybrid format and Plan C, which is the purely online option. Plan B will include two days of in-class and three days of remote instruction each week, but “that remote instruction is different than the remote instruction for students whose parents choose Plan C,” said Sale. Those differences come from the time students are expected to work while they are not in a class and will supplement what they did the two days they were in class.

The schedule for Plan B was discussed, and students enrolled in it will be divided into two groups: A and B. The A group will be on campus Monday and Tuesday then will have remote learning Wednesday, Thursday and Friday. The B group will be on campus Thursday and Friday. There will be no students on campus Wednesdays, which is scheduled to give teachers that day to plan and custodial staff a day to deep clean. However, it was mentioned that for the first week, only there would actually be four groups as A would be split in two, so would B, so only the first-week students in each group would only be present on campus for one day that week. Students will have the option to change to Plan C, but once a student does that “there is no going back” to Plan B, Sale said.

Restrictions will be in place for bus riding, as students will be set to ride the same bus every time and will not be allowed to do things like ride the bus home with friends. The school system also wants parents who have joint custody of a child to know the child has to ride the same bus, so the parents need to make arrangements based on that. Sale stated that “if there is a joint custody issue that those two parents develop a plan and they pick one-stop.”

Grading for the semester will be based on quality and completion of work, and attendance will be based upon turning in of product, he said. Other measures will be in place to increase safety on campus, such as no visitors allowed in the building except for a few exceptions, including interns from Western Carolina University, which will be vetted before being allowed in.

Sale briefly discussed Plan C, or remote learning, saying, “Every student will have a facilitator, and that person will be an employee of Swain County Schools and will have access to teachers.”

Swain County Health Department Director Alison Cochran provided an update on the numbers regarding COVID-19 as of July 23. There have a little over 51 million tests given at the national level, and 9.8 percent of those have come back positive, she said. The fatality rate in the United States is 3 percent. In North Carolina, there have been approximately 1.5 million completed tests with about 107,000 confirmed cases, and the fatality rate is roughly 1.6  percent, she said.

In Swain County, there have been 2,710 tests completed, as of July 23, and 90 have come back positive since March, so the county’s positive test rate is 3 percent.

Cochran also elaborated on what symptoms the school staff should be looking for: “fever, chills, shortness of breath, new cough, or new loss of taste or smell.”

At this time, children account for a small percentage of the positive cases throughout the country.

“The largest positive age group is the 25- 49 year old and that is pretty consistent across the nation,” Cochran said.

School board chairwoman Mellie Burns asked, “Do you have a personal opinion should we have student’s person-to-person--face-to-face?”

Cochran said based on the requirements going in and the lower number of cases here, it seems like a reasonable choice for students to return.

“Our numbers are much lower than counties around us, even downstate, so that makes me more inclined to go back to school,” she said. “I think 50 percent is a very wise decision, and I think it will be very important for everybody to wear masks. When you stop wearing masks, you have that transmission, and that is where you are going to get your cases.”

She did add, however, that the requirements surrounding wearing masks, social distancing and testing will make be a challenge.

Quarantine requirements could cause difficulties

If a student or staff person is exposed to someone with COVID-19 they may be quarantined for 14-days, which could be problematic for the school. Sale said that the 14-day quarantine may be difficult to work through and referred to it as “a big hurdle that can create some real issues for us.”

“That one piece could put us in Plan C faster than anything else,” Sale said. It could create a shortage of teachers and other staff, which “When it begins to affect our staff, it’s going to be difficult to offer quality education for every student unless I have an adequate number of people in the building.”

Superintendent Sale discussed the Jump Start program, which is currently underway, and has allowed the school to test some of the procedures of checking students in. Amanda Sutton, who is heading the program, discussed the process they were going through to check-in students coming into school, bus seating arrangements, and how the students are assigned a seat based on the location of their stop to minimize contact with other students.

Students who are brought to school by their parents will remain inside the car while their temperature is checked, and will be asked the three questions with the parents there. According to Sutton, students that ride the bus will “get off one at a time, and teachers line them up on the concrete lines which is actually more like seven feet instead of just six feet apart, and one teacher will check the temperature, and the other will document it and ask the questions.”

Burns asked her how long it took, and she gave a time frame of fewer than 10 minutes to check-in eight students.

Board member Lambert Wilson asked Sale if there was a way for the “bus drivers to check the student’s temperature before they get on the bus.”

Sale said it was decided that isn’t the best approach. “First, it is difficult for the bus driver to maintain safety and do that, and that has been a discussion point across the state. Even today in a conference call I had with all the regional superintendents, and one of our primary concerns is if they have a temperature and if we send them home, are we sure that someone will be there to take care of them?”

There was also a discussion about the possibility of having an additional school employee on the bus to check temperatures, however, Sale estimated it would cost around $155,000 to have an extra person on every bus for the entire year.

School board member Travis Hyatt raised concerns about how long it will take to screen a student boarding a bus. There was also discussion about sending an attestation form home to parents; that document is showing that a parent promises to screen his or her child before sending them to school. Sale said there was the possibility of providing thermometers to parents. Wilson said it would be cheaper than paying an extra staff member to ride each bus.

Sale also addressed plans for Bright Adventures Pre-K, which has different guidelines, and it is considered a daycare by the state, so those students can attend five days a week. Bright Adventures will conduct health screenings and check temperatures of the students and staff coming through the door, daily, and visitors will be limited. In the past, parents have walked their children into the classroom and signed them in, but now parents will drop their kids off at the front ramp after they have completed the health screening for the child and indicated their plans for the day.

The next meeting of the Swain County Board of Education will be held on Monday, Aug. 3 at 6 p.m. at the Swain County Administration Building, 50 Main Street, on the second floor. The meeting will also be viewable live on the Maroon Devils Network.