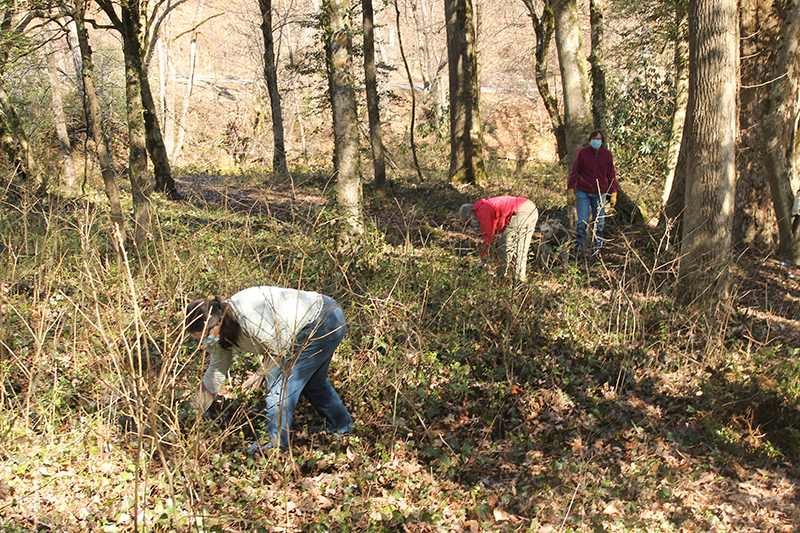 Island Park in downtown Bryson City is a popular spot for locals who want to walk their dogs; folks who want to take a short walk on their lunch break. It’s also common to see someone toting their fishing pole to the park or a group of kayakers with their boats in tow.

Extensive storm and flood damage to the island located on the Tuckasegee River closed the park last spring, however, and it’s been shuttered since.

The damage is two-fold, high floodwaters last year destroyed banks along the island and downed trees. The trails also washed out.

The Town of Bryson City, who owns the park, was working toward securing federal funding through FEMA to restore the park. The agency declined a funding request in November for bank restoration, stating it was because the town hadn’t invested anything in bank restoration itself.

On the bright side, Town Manager Regina Mathis shared recently that the town has been approved for some FEMA funding to correct damage on the island itself, with the agency set to fund 75% of the cost for the repairs and the state supposedly will be on the hook for the remaining 25%.

Mathis outlined the work to be conducted on the island primarily by town staff:

“We will be removing some of the debris and some of the fallen trees,” she said by email. “We will be replacing the picnic timbers and gravel for those areas; and we will replace the gravel along the walking paths.”

In addition, FEMA has funded sidewalks repairs on Island Street, as well as repairs along Riverview Road where the town sewer plant is located. All those areas suffered storm damage from flood waters last year.

She also confirmed the town is still interested in future collaborations with the recently formed local nonprofit Tuckaseigee River Alliance to see the island has a vibrant future.

Discussion on Island Park is set for the next town board workshop meeting.

The park is still closed to the public at this time for safety reasons.

Pitching in for plants

The Tuckasegee River Alliance has partnered with area nonprofit Mountain True, and together the organizations have been working on clearing invasive plants from the island.

In November, Tony Ward, with Mountain True, explained the invasive plants had a chance to really take hold on the island last year when it was closed to the public.

Kudzu, Japanese stiltgrass, English ivy and multiflora rose are among the plants volunteers are working to get under control, he told the Bryson City Town Board of Aldermen at their meeting. He estimated it could take about two years to really curb the growth of the invasive plants, particularly kudzu.

The agency hosted a handful of workdays in November and December and two this month, Saturday, Feb. 6 and Wednesday, Feb. 10.

Smoky Mountain Times caught up with the volunteers Wednesday.

Kellie Moore, also with Mountain True, shared this was the third work day for the group and estimated it will take 2-3 years to clear the island of all the non-native and invasive plants.

On Wednesday, volunteers, pulling the smaller growth for invasive plants like Chinese privet up by its roots. For larger plants, they were cutting the growth back and targeting the roots with herbicide in a bottle with a foam top.

The next volunteer day is scheduled for March 3.

To learn more about MountainTrue or sign up for an upcoming workday, visit mountaintrue.org or find Tuckasegee River Alliance on Facebook.