Closings, cancellations pile up over COVID-19 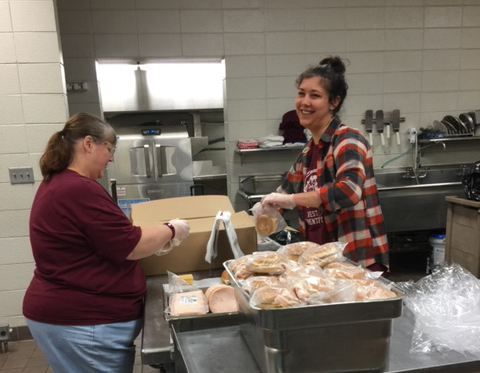 Swain County Health Director Alison Cochran told county commissioners Thursday night that her agency is in contact with community partners, among them the nursing homes and even county transit and others on preparing against the potential spread of the novel coronavirus COVID-19.

The department has posted flyers throughout the county providing information to residents. Along with County Emergency Manager David Breedlove, they have been in contact with the County Manager Kevin King on how best to protect the county employees.

“Information is changing daily,” she told the board. That statement has proved true over the past week as the message to decrease public contact has been implemented everywhere from the baseball field to church pews, schools and even restaurants and bars.

The latest came Tuesday, March 17, with Governor Roy Cooper announcing a new executive order to close restaurants and bars for dine-in customers and limiting them to offering take-out only.

The order included an expansion of unemployment insurance and other measures to help soften the blow to businesses and employees. The action took effect 5 p.m. on Tuesday. Some businesses in Bryson City had already taken action prior to the announcement, some limiting business to take-out and others closing for the next 2 weeks.

Both Harrah’s Casinos in Cherokee and Murphy as well as Great Smoky Mountains Railroad announced it would close for the next 2 weeks as a precaution.

Harrah’s announced it would close beginning 6 a.m. on Wednesday, March 18 and that employees would continue to receive pay and benefits. That evening, the announcement came from the railroad that it would suspend its passenger train operations until April 1 and waive cancellation or rescheduling fees.

Also Tuesday, Swain County Board of Commissioners followed suit with the state and federal government in declaring a State of Emergency in response to the coronavirus pandemic. This was made in agreement with the mayor and board of aldermen of Bryson City. The order notes that multiple cases have been confirmed in North Carolina and the Centers for Disease Control has recommended people limit their exposure. The declaration will remain in effect until rescinded.

This was a certain change in the message from what Swain County Schools had announced just the previous day at an emergency called meeting on Friday evening that it would plan to stay open while increasing sanitation measures.

During the meeting, the board heard a four-phase plan for the school system in response to COVID-19 that follow the School Decision Tree from the CDC, which can be found on the school website, www.swain.k12.nc.us.

“We want to reduce the impact on student learning but keep it from spreading,” said Katrina Turbyfill, during the presentations Friday.

“We’re concerned about kids not having food, so we’re already making plans about how to get the food to them,” she added.

With the Governor’s announcement Saturday, the district went straight to work to make sure students wouldn’t go without needed meals.

Starting Monday, the cafeterias at East, West and Swain Middle schools were serving breakfast and lunch to go for students from 7:20 a.m.-2 p.m. and will continue to do so, with the meals available to all children.

Beginning Tuesday, those efforts increased to bring the meals out to students as bus drivers began running their regular routes and delivering meals between 10 a.m. and noon.

In the announcement, the school system stated the buses would make their regular stops and all kids would receive meals for free. The bus driver blows the horn and waits for several minutes for pickups. Adults or older children are recommended to be the ones to grab the meals.

The district reported it had served 605 meals for the community on Tuesday.

College students will also be staying home. Last week, both Western Carolina University and Southwestern Community College announced they would extend spring break by a week for teachers to adjust in-person classes to be online.

Following Gov. Cooper’s announcement of a state of emergency last Tuesday and recommendations for people to avoid large groups of 100 or more, sporting events and other public gatherings started taking note.

Announced Thursday, the North Carolina High School Athletic Association made the decision to suspend all high school sports throughout he state beginning Friday, March 13 at noon due to the threat from COVID-19. For student athletes and parents, this impact is big: all workouts, skill development practices and games are on hold until April 6 when the organization will reassess.

Similarly, the Swain Youth Soccer Association announced Thursday it was following the state’s soccer association’s lead by suspending all activities until April 1, at which time they will decide about the remainder of the season.

Other sporting events in town were also cancelled including the Smoky Mountain Roller Girls double header that was scheduled to take place Saturday, March 14 at the Swain Rec Center.

National sports fans will feel the impact, too, following cancellations of the NBA games and the NCAA.

The sporting event with the greatest potential economic impact for Swain County, the 2020 International Canoe Federation Wildwater World Championships, that was scheduled to take place in Nantahala April 26-30 were announced as cancelled on Thursday morning.

The event that would have brought an estimated 150 wildwater athletes from around the world, their support staff, family and fans to the event hosted by the Nantahala Outdoor Center was anticipated to bring visitors to Swain County for about 2 weeks.

Following the recommendations to limit large group gatherings, many churches throughout Swain County put services on hold starting this past Sunday. Some, like The Grove, were able to offer live stream online services.

The hospital, nursing home, senior living center and jail all increased their visitation restrictions to help reduce the risks posed by the contagious coronavirus.

On Friday afternoon, Swain Community Hospital took steps to further limit the risks the novel coronavirus COVID-19 poses to patients and imposed visitor suspension at the inpatient unit at the hospital.

In a media statement, the hospital began by stating it is “committed to providing the highest quality care and ensuring the safety of our patients, employees, providers, volunteers and visitors” and is working closely with the local health department to “plan, detect, protect and respond.”

Similar restrictions have been implemented at the nursing home and senior living center. Even at the Swain County Detention Center, the sheriff announced face-to-face visits with inmates were being suspended for now.

Cheri Beasley, Chief Justice of the North Carolina Supreme Court informed the legal community in a notice Friday afternoon the courts are declaring catastrophic conditions resulting from the public health threat posed by COVID-19 across the state under NCGS 7A-39(b)(2).

The directive took effect Monday and postpones most in-court activity for at least 30 days.