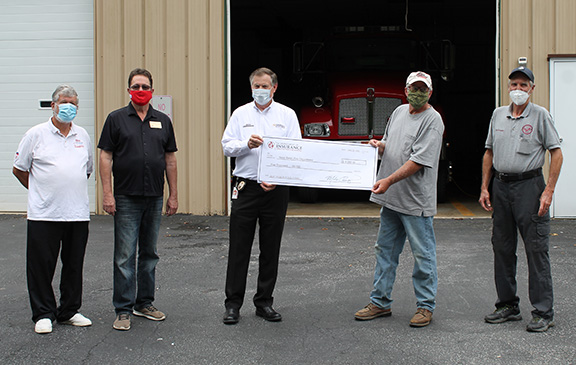 The two grants are a part of funding made available by N.C. Blue Cross Blue Shield.

Causey said his office identified the fire departments with the most need to determine where the funds would go. Rural fire departments in Graham, Cherokee, Clay, Madison, Avery and Rowan counties were also awarded from the grant fund totaling $500,000.

“We’re thrilled with this,” Corbin said about the funding to local rural fire departments.

Most rural volunteer fire departments depend on fundraising events to supplement their government funding. The recent restrictions on public gatherings because of the coronavirus pandemic have limited their ability to raise these funds.

Causey pointed out Swain County was one of the only counties with two departments that were awarded.

“Thank you all for what you do serving the community,” Causey said before the local fire department leaders. “The sacrifices you make, people don’t realize what volunteers have to go through and put up with.”

Through the partnership with Causey’s office and BCBS, generous funding will be dedicated to community colleges for firefighter training and two-year programs.

“Thank you, this will go to good use,” said Jim Freeman, chairman of the board for West Swain Fire Department.

“We’re looking at improving our radios in the county, because communication is a priority,” Winchester said.

Radio improvement is an across the county effort to better service the public, he added.

“What Ervin is saying about the radios is true, it needs to be improved,” said David Sawyer, Alarka fire department chief.

They named several areas of the county that are suffering for a lack of good communications service, including Deep Gap, Brush Creek, Conleys Creek, Greasy Branch and the Nantahala Gorge.