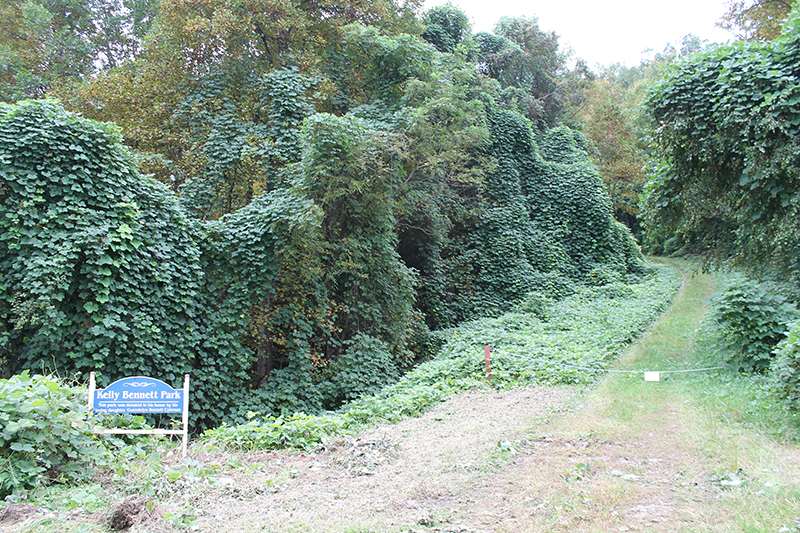 A piece of property owned by the town that has long been underutilized may in the near future provide lots of fun for locals and visitors. Plans are in the works to develop Kelly Bennett Park, located up Bennett Hill, by adding some mountain biking/hiking trails.

“The project we’ve been working on is the Kelly Bennett property,” Chris Royce said before town board on Monday, Oct. 5. “On 14 acres, we’d proposed a 3-4 mile multi-use trail system on that property. Trail Dynamics who developed the trails in Cherokee could easily get 3-4 miles of trail on it.”

In a follow-up interview, Royce said Mayor Tom Sutton came to them with the idea after taking a trip where he did a lot of biking. “He came to us with an idea of putting in some trails,” he said.

Donated by the Kelly Bennett family, the property would retain the name honoring the man who contributed much to Bryson City in the early-mid 1900s (highlighted this month in Smoky Mountain Times in Jim Casada’s columns).

The idea to develop the park got a push earlier this year. Mountain biking trails are a good fit, since the terrain is steep.

Those interested in bringing trails to the park, including Kyle Henry, with the help of Nantahala SORBA are applying for a shovel ready grant for $120,000 with the project’s estimated cost at about $150,000.

Royce added later there are also Recreational Trail Program grants that they can apply for in the spring.

“We’d like to start processing some other grants,” Royce said before the board. “We could easily do fundraising to build up the remainder.” Ideas include having donors sponsor specific sections of trail.

The proposed plan for the park would be to have hours be dawn to dusk and to add a parking area with about five spaces and have trashcans. The town is being asked to put in the parking lot and maintain it. On trail maintenance, however, Royce said volunteers could manage that.

In addition to the plans for the 14 acres, Royce shared plans for Phase 2 for Kelly Bennett Park, adding an additional “1.4 acre parcel down the road for additional section of trail. There’s also an old logging road that crosses that property that could be connected.”

Brett Hackshaw noted “the 1.4 acres is a lot less steep” and that the park, located just up the hill from downtown, “would be good for locals.”

The board was receptive to the plans.

Board aldermen Chad Smith said he is comfortable with the plans. “After looking at the map and seeing the subdivision is on the other side I don’t see an issue,” he said.

“We’re not talking about motorized?” asked alderwoman Janine Crisp, with Royce confirming the trails will just be for hikers and people on mountain bikes.

Alderman Ben King commented, “This is the most progress we’ve seen with this piece of property. It’d be nice to see people use it.”

“It’s the most I’ve seen in my lifetime,” noted Mayor Tom Sutton.

Also discussed briefly was the need to have the town act as the financial agency for the park.

Asked in an interview if he foresees having a mixed use trail so close to town could be beneficial for local residents and might increase interest for mountain biking, Royce said, absolutely. “It’s proven all around the country towns that embrace biking and outdoor activities” become a draw for visitors. Bentonville, Arkansas is a prime example, where local leaders invested in hundreds of miles of trails that draw people from around the world.

Royce also sees the planned park to be a good option for locals in the summer months when the trails at Deep Creek can become crowded with visitors.

The trails will be for intermediate riders. The timeline is fluid at this point, and will depend on grant funding and when the designers can fit the project into their schedule.

The board plans to take action on the subject at their next meeting, Monday, Oct. 19 at 5:30 p.m.