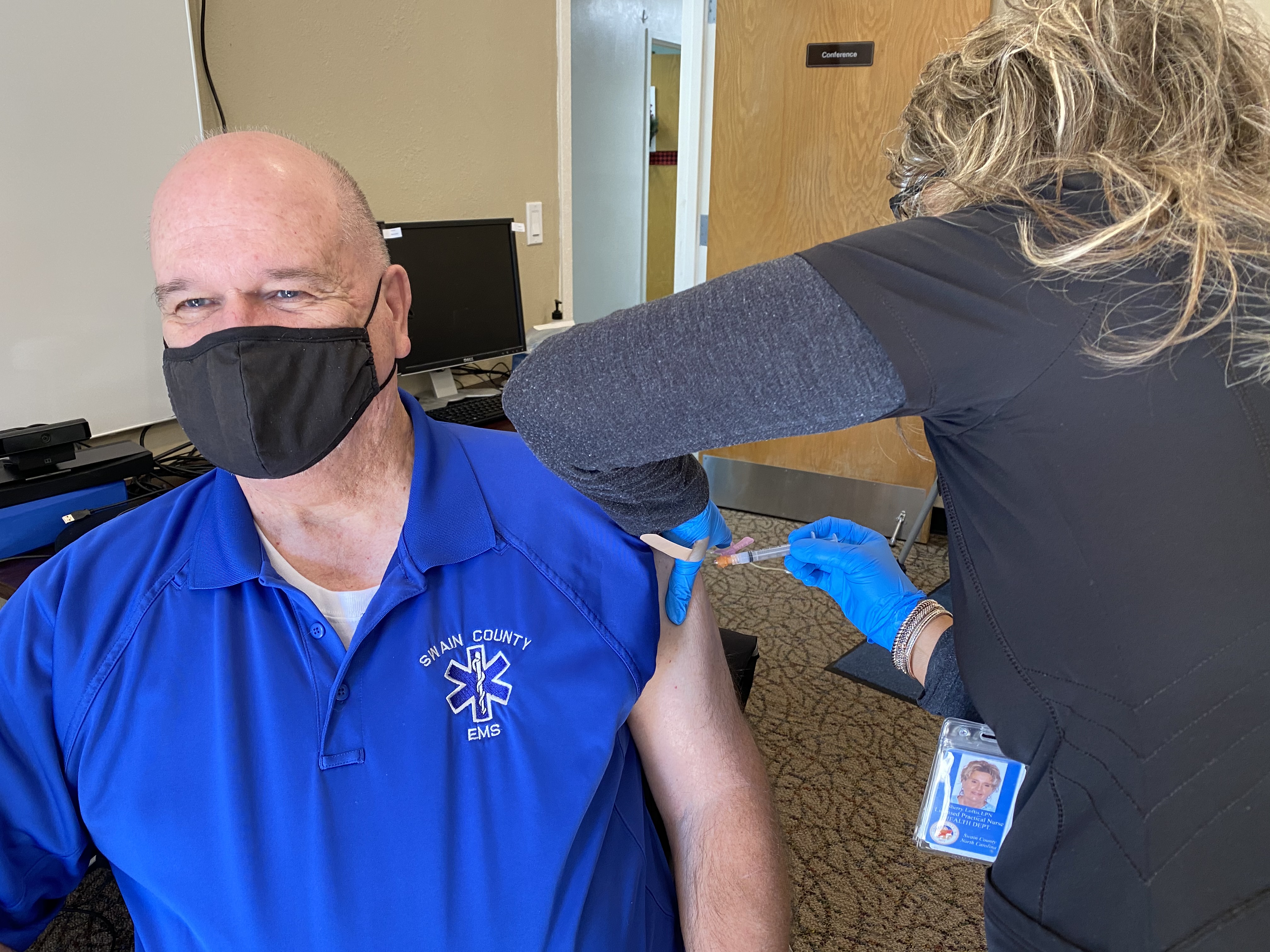 “We are working now to vaccinate those in Phase 1a: EMS, Smoky Mountain Urgent Care, first responders, Blue Ridge Health and others,” she said.

Cherokee Indian Hospital received its first shipment by Dec. 15, with 900 doses of the Pfizer vaccine and began administering them the following day, reported Cherokee One Feather.

Statewide, the Pfizer vaccine first got shipped to hospitals equipped for the extreme cold storage required for the vaccine. Those shipments began Dec. 17 with Mission Health and Haywood Regional among the first to receive it in the far west.

The vaccines are being provided for free to all recipients. The first people being vaccinated are healthcare workers and first responders.

People living in long-term care facilities, including Bryson Senior Living Center and Mountain View Manor will also be vaccinated and are also now beginning to receive vaccines. Walgreens and CVS Pharmacies are assisting with that program. (Watch for coverage in next week’s paper.)

The Pfizer and Moderna vaccines were tested in clinical trials with more than 70,000 volunteers and found to be 95% effective in preventing COVID-19 with no serious side effects.

The vaccine does not have any live virus in it. The vaccine imitates the infection so that the body thinks a germ like the virus is attacking. This creates the antibody defenses the body needs to fight off COVID-19 if and when the real germs attack. Temporary reactions
include sore arm, headache, or feeling tired and achy for a couple of days, according to NC DHHS.

Both vaccines require a second dose about three-four weeks later, and North Carolina residents who have gotten the first dose will have a smartphone app that will notify them when to get the second vaccine. It will also allow them to track any side effects.

There is still the need for clarification about the exact timeline for distribution and how the rollout will be handled once it is open to more people.

“Vaccinations will depend on shipments allotted from NC DHHS,” Cochran said. “The plan is we will receive those weekly, but it will also depend on the need in other parts of the state.”

The federal government shared new recommendation on Dec. 22, and NC DHHS has yet to release its update. Yesterday, Cochran said her office had just received that information and that guidelines have changed.

“The state has changed its guidelines for Phase 1b, and we should receive that communication today and will notify the public by Facebook,” she said. “We will also send this out to all media outlets.”

In North Carolina’s rollout plan announced mid-December, healthcare workers and long-term care were in the first round of vaccines (1a). Next up were adults at highest risk of severe illness and with the highest risk for exposure, including adults with two or more chronic conditions and with high exposure like frontline workers including teachers, child care, law enforcement and detention officers.

When more vaccines are shipped, it was to be broadened to more frontline workers and adults over 65 with one chronic condition (2). This would then be followed by college an university students, K-12 students when there is an approved vaccine for children and those employed in jobs that are critical to society and at lower risk of exposure (3). The final group would be everyone who wants to receive the vaccine (4).

There have been no further details released at this time about how people will be notified. It is safe to anticipate that in the first group, that will be managed through their place of employment. Swain’s Health Department Director Alison Cochran hinted at the possibility of hosting drive-thru events for the next groups.

The United States is being criticized for the federal government being slow in the roll out of the vaccines. At the beginning of December, the current administration announced over 20 million people would have received the vaccine by the end of December. Instead, we’re at the end of the month with just 2.1 million vaccines being administered among the 11.5 million doses shipped. More than 330,000 Americans have died from the virus since the outbreak started in February.

One more death in county

In Swain County, eight people have died from COVID-19 since the pandemic started, with one of those deaths occurring in the past week. The number of active cases rose to its highest just before Christmas on Dec. 23 when there were 105 active cases. The latest data released Tuesday, Dec. 29 shows that number dropped back down slightly to 94. Since testing began, there have been 693 positive test results among 11,939 in the county. Broken down by zip code, the highest number of positive cases has been in residents with a 28719 (Cherokee) zip code, with 351 positive cases followed by 28713 (Bryson City) zip code with 311 positive cases.

Smoky Mountain Times reported last week Sheriff Curtis Cochran had to go back to the hospital last week due to the virus. He has since been released and is on the mend. He was back at his office on Monday. Chief Deputy Jason Gardner said the outbreak they had at the jail is at its end. Everyone who was out of the office due to testing positive for COVID-19 has since returned with just one out with a positive flu test on Wednesday.

Health officials anticipate there will be two more back-to-back spikes due to social gatherings for Christmas and New Years.

“Social gatherings do contribute to a rise in cases and we expect our numbers to increase due to Christmas and New Year's celebrations,” Cochran said. “We encourage people to continue following social distancing and mask mandates.”

In her reports before county commission and board of education in mid-December, she said the majority of cases were traced to other cases. The biggest factors for spreading were family gatherings and churches.