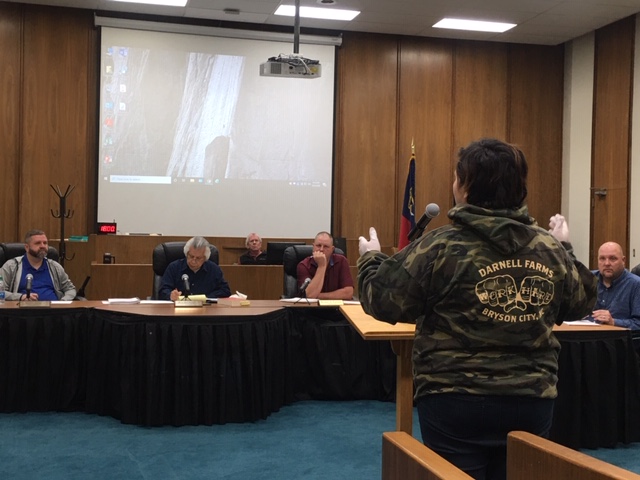 In a special called meeting on Monday morning, the Swain County Board of Commissioners unanimously adopted a supplement to the State of Emergency declared last week. The new measure calls for all hotels, motels, inns, rentals, campgrounds, etc., to close to short-term rentals as of Tuesday, March 24 at noon.

The exemptions to the order include one-month or longer leases or legitimate work-related stays.

The order, like the declared State of Emergency is effective until further notice.

In addition to closing vacation stays, the order bans gatherings of 10 or more people in the county and town starting at noon Tuesday and effective until further notice.

The order makes not that “medical facilities, grocery stores, pharmacies, convenience stores, gas stations and food distribution sites, to the extent they sell or distribute prepared food, are exempt of the provisions of this declaration.

“Further, food banks and other food distribution sties, farmers’ markets, retail and hardware operations, and rental centers in which the public is not generally in close contact with other patrons are exempt from this declaration.”

At the start of the meeting Monday, Commission Chairman Ben Bushyhead addressed the fact others, including the Eastern Band of Cherokee Indians on the Qualla Boundary, and Graham County have taken more drastic action, essentially closing their borders.

“One of the questions that has been asked is why Swain County does not close its border as has Graham County, and as we read the tribe has done some of that not all of that, and I think that’s important to understand. Not everyone is doing that,” he said.

Swain County Health Department Director Alison Cochran and Emergency Management Director David Breedlove were at the meeting to brief the board on the situation.

Cochran answered some questions after providing the statewide update, including the length before test results are back. As of that time, she said it is taking 3-5 days. “There is a new rapid test that’s just been developed it takes 45 minutes but at this moment our Urgent Care and hospital do not have the capability to do that,” she said.

She confirmed that the new guidelines are that if you are sick with mild symptoms to stay home to help further contain the potential spread.

The State of Emergency gave the county the authority to take action as needed. The update to it is an effort to stop the spread of the virus, Breedlove said.

Sheriff Curtis Cochran later addressed the lack of staff to cover closing roads in and out of the county if that was something the commissioners were looking at.

“We’re going to be monitoring this thing daily,” he said.

“Just take 74 westbound, for an example,” he said. “If we were to shut that down, we’d have to have four different checkpoints for that one intersection. It’s not one vehicle per checkpoint, it’s at least two, so that’s eight people right there 24 hours a day, 7 days a week, and then you figure all the roads out in the county that has ingress into the county, we just don’t have enough resources to do all that.”

The board also heard from a couple of members of the public. Among them was Afton Roberts with Darnell Farms, who asked for further clarification on being allowed to continue selling produce for pick-up and delivery.

“We’re taking all the appropriate precautions,” she said.

“If nobody else is gonna speak up I will. This sounds exactly like what I believe most the people here want. I think this is something that needs to be done we need to keep the people from out of town who possibly have this virus away from infecting everybody,” he said.

“I agree with the steps we’re taking but, I want to make sure the county and city keep in mind the economy is in effect here depending on how long we do this…keep in mind this economy is driven by a lot of the things being closed down, and the longer it stays closed down the longer the lasting effects it will have on employment.”

Prior to adoption, Bushyhead again stressed the county doesn’t want to do anything that would keep people from being able to go grocery shopping or get things they need.

County Manager Kevin King did say the county is looking at ways to keep social distancing in place but keep services open. All the critical businesses will be business as usual he said but the recreation department will be looked out to maintain the social distancing as advised by the US Centers for Disease Control.

Commissioner Danny Burns asked for clarification as to the impact of people who are already currently staying.

“We’re kind of in uncharted territory but I’d say this is a law that goes into effect tomorrow at noon so anybody in a motel after that is in violation,” King said in response, confirming it would cover all the short term locations.

“I’d like to reassure everybody we’re monitoring this daily, and we’ll stay on top of this,” said Commissioner Roger Parsons.

Commissioner Kevin Seagle also stressed the need for the board to meet regularly during this time. Both he and commissioner Kenneth Parton agreed it is important to make sure they share the information on as many avenues as possible.

“Just letting the people know where we’re at; what’s going on. I think everybody feels better when they know what’s going on,” Seagle said. He added he would like the board to think about a Swain County stimulus plan once the crisis is over.

“It’s our job to make sure our county does not suffer and make sure our people have every access there is to get (information on resources they need),” he said.

The commissioners have scheduled another special called meeting to continue to stay informed on the county level response to the public health crisis of COVID-19 for Friday, March 27 at 9 a.m. at the Swain County Administration Building. The meeting is open to the public, but measures will be in place to keep groups to 10 or less.