Vaccines now open to those 65+, all healthcare workers 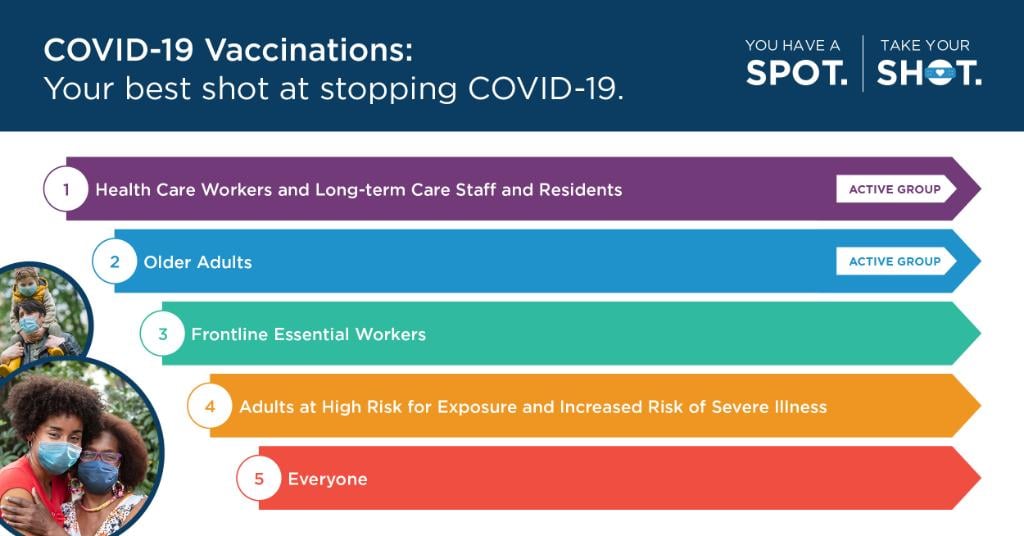 It wasn’t on the initial agenda for Swain County Board of Commissioners regular meeting Thursday, Jan. 14, but COVID-19 ended up becoming the biggest topic of the evening. In actions, the board adopted a sick leave policy adding 80 more hours of sick leave pay for employees who are out because of COVID-19. The board also heard updates on the district-wide campus closure for Swain schools and on local vaccinations.

“We had been struggling all of last week to keep enough teachers and assistants in the classrooms,” he explained. In one week alone, 58 staff people were out for at least one day including 45 instructional staff.

He stressed the need for the community to do what it can to continue to prevent the spread of the virus.

“I’m looking forward to the day whenever the sun shines longer and the vaccine is available and we’ve gotten through our second set of shots,” Sale said.

Sick leave policy for COVID-19 was added to the evening’s agenda as per the request of County Manager Kevin King. Back in the spring, the commissioners instituted 80 hours of sick leave for when people were out because of the coronavirus.

“It is after the first of the year, and I’d like to recommend another 80 hours,” King said. Several employees have already exceeded the 14 days covered by the adoption in the spring, he said.

Commission Chairman Ben Bushyhead asked how adopting the policy would impact the personnel budget, but King said that it shouldn’t really, since salaries and hourly pay is already budgeted. For departments who need someone else to cover those shifts, he said, they have overtime pay built into their budgets.

The board unanimously adopted the addition.

Later in the meeting, Commissioner Roger Parsons asked Swain County Health Director Alison Cochran to address the announced change that vaccines will now be available to people 65 and older as per newly updated federal and state guidance.

Cochran confirmed it will and also be expanded to any healthcare workers not just those who come into contact with COVID-19 positive patients.

Vaccine appointments at the health department for last week were full, but people can begin making appointments for the next shipment beginning Thursday, Jan. 21.

Cochran said her department received a shipment of 200 vaccines last week. On appointments, she said, “Within an hour, we were filled for all of next week.”

On the second shot, she explained those are held back by the state and first responders vaccinated in mid-December will be called back for those soon.

Commissioner Kevin Seagle asked when data might be available about how effective those vaccinations were?

Cochran replied that she had no idea, but that would be handled by the state.

He also asked if there have been any adverse reactions to the vaccines among people who have received them in Swain County?

“I have not been alerted to any,” Cochran said. “The most I’ve heard is a sore arm and some body aches like when you take a flu vaccine, that kind of thing.”

“So, the fear is exaggerated?” asked Seagle.

Commissioner Bushyhead discussed the need for data on how many vaccines are being made available to our small county and the need here so that the state gets the message that we need more than what we’re getting here.

“It appears to me we need that kind of data so we can say, ‘you’re ignoring us,’’” he said.

Cochran confirmed that data is being reported to the state. She also said the health department would do more if they had the vaccines available, but they depend on the state and the state is depending on the federal government.

“It’s not that we don’t want to have a big vaccination clinic but we don’t have enough vaccines,” she said.

Cochran also updated the board that Walgreens in Bryson City has enrolled to be a provider so, in the weeks ahead, they should also get the vaccine and will be able to take appointments.

Mountain View Manor has received its vaccinations and Bryson Senior Living was scheduled to this weekend, she said. Unfortunately, she also shared that Mt. View Manor had an outbreak in one hall at the nursing home that has impacted 12 people.

Swain County EMS has also had an outbreak, with 11 out previously and eight on Thursday. Commissioner Danny Burns asked if they had been vaccinated?

Although first responders were in the first group of vaccinations, Cochran said some declined the vaccines.

Also in the meeting, commissioners agreed that they were okay with the health department ending its twice-weekly report and directing people to the state website for local data.

It takes about 2 hours to compile the local report, she said, and noted, “We don’t have time to do that anymore.”

In other business Thursday night, the commissioners unanimously approved a 2-year lease with Beasley Flooring Products.

“They have been in that building, well Shaw, their predecessors since 2001,” King said, and they wanted a new arrangement for longer than a 1-year lease. The agreement is for $6,125 a month to the county.

“It’s good to me to see the business is remaining and jobs are remaining,” Bushyhead said.

In discussion, King also reported ConMet continues to operate in its building with about 28 people with two shifts going and the company expects to continue to do so through this fall.

The board also appointed Tommy Dills and Sammy Bowers to the dangerous dog review board. The board unanimously approved the tax report, finance report and adopted the meeting minutes.

In other discussion topics, King reported the pool project is moving forward with Paddington Pool hired for the work with the hope to have it completed for a Memorial Day weekend opening. Additionally, the pavilion project at the event park is moving ahead with Strong Building Systems who will construct it off site and hopefully have it in place by April.

The board’s next work session meeting is scheduled for Thursday, Jan. 28 at 6 p.m. at the Swain County Administration Building.