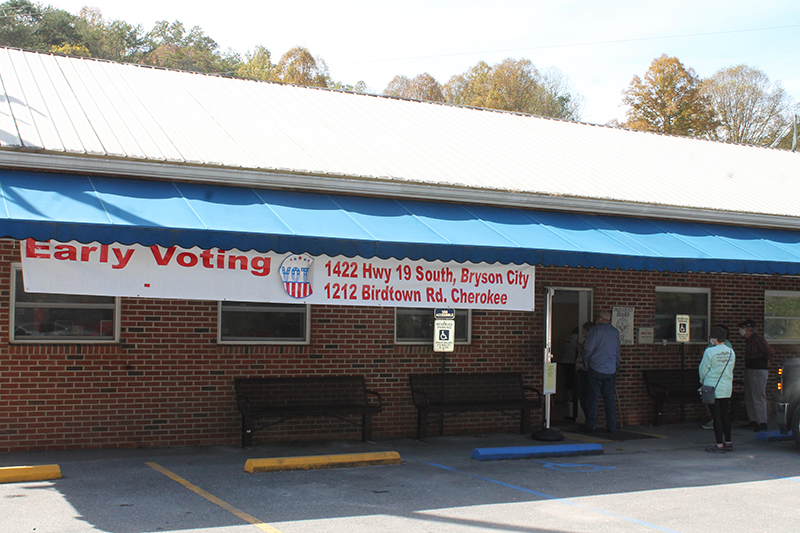 In Swain County, waiting in line can be newsworthy. That’s certainly true when it comes to early voting, as Swain County voters, like other American across the United States, are turning out in record-breaking numbers.

Through Tuesday of this week, 2,101 voters have cast ballots during one-stop. The first day was particularly busy.

One-stop is available in Swain County at Birdtown Rec Center at Birdtown Road, Cherokee, and Swain Board of Elections Office locate at 1422 Hwy 19 South, Bryson City.

“I was at Birdtown when we started, and there was a little bit of a line. Over here, it was just swamped from what others have said. They have never seen anything like it that first day,” shared Dean Tripplett, Swain County Board of Elections Deputy Director from the office.

The process for early voting where there are added measures in place to prevent the spread of coronavirus is running smoothly, she added.

“It’s been wonderful. Voters have been very understanding and we have not had any problems,” Allmann said. “I truly appreciate all of my one-stop workers they have put many hours in.”

Statewide, 333,134 ballots were cast on the first day of early voting, breaking records for any single day of early voting in the state. As of Tuesday night, that number has increased to 2,155,350— nearly 30% of registered voters.

Absentee voting is surging this election season in equally record-breaking numbers. In Swain County, the office has received 536 returned absentees. Statewide, there have been 660,390 absentee by mail.

In Swain County, more than 26% of voters have already cast ballots. With such a turnout, the county is on pace to break the 2016 numbers where more than 50% of the voters participated in the general election.

“We’re glad to see so many North Carolina voters performing their civic duty and letting their voice be heard by voting,” said Karen Brinson Bell, executive director of the State Board of Elections in a press release. “We look forward to more North Carolinians casting their ballot and staying safe while doing so.”

Voter intimidation has been a concern in some districts, but Swain County has not seen any problems like that.

“We haven’t gotten any reports of voter intimidation,” confirmed Tripplett. “We do have a plan in place in the case that this were to happen during early voting or on election day, God forbid. The sheriff’s department is ready to respond to any kind of incident.”

According to the state elections office, the state has more early voting sites now than it did in 2016 and increased hours.

The deadline to request an absentee ballot is Oct. 27, although elections officials and U.S. Postal Service are encouraging voters to request their ballots as early as possible to be sure they are received by the elections office by 5 p.m. on Nov. 3.

Allmann reminds voters that if they are not already registered or they need to change their registration information, they can do so during early voting.

“If they aren’t registered they can come in during one stop and register and vote at the same time,” she said.