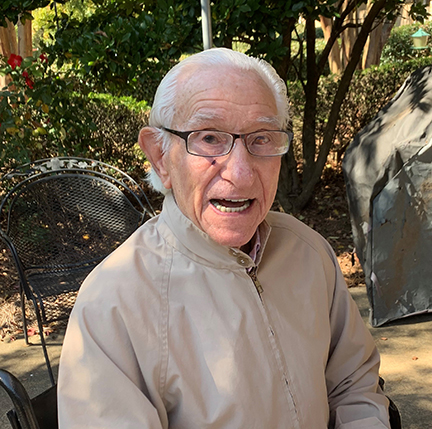 Roy, 97 formerly of Belmont, NC, went to be with his Heavenly Father on Wednesday, December 16th.   He departed this earth listening to the song “Oh, How I Love Jesus”.  Roy loved the Lord and lived for Him every day of his life!

Roy moved his family to Charlotte in 1952 after attending textile school.  He worked for Morris Spiezman until 1967 in their parts department.  He retired in 1987 from Mitchel Distributing Company after 35 years of service.

Roy served his country in the US Army during World-War II in Germany, France and Austria during which time he was awarded the Bronze Star.  He was an avid gardener, a baker of Coconut Pecan Cakes, a first-class mechanic, washing machine repairman and one of the 1st recycling kings.

He was a faithful member of Lifebuilders Church (formerly Oakdale Church of God) for over 70 years serving as an usher, men’s council member and Sunday School teacher.  Although, being diagnosed with dementia, he never forgot how to pray!  He prayed for anyone and everyone!

Roy was preceded in death by his parents, John and Nannie Setzer; his wife, Eva Mae Burns and a granddaughter, brothers Robert, Claude and Sherman Setzer.

The family was serviced by Forest Lawn West.

Memorials may be made to Lifebuilders Church.