Swain football starting out cold & without Blankenship at helm 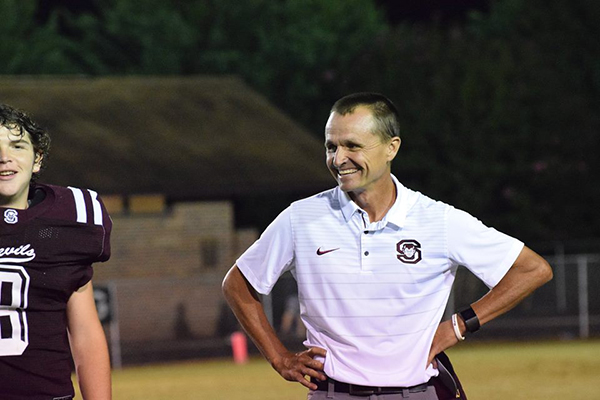 Swain County High School varsity football season normally begins under the song of summer cicadas and ends with the smell of late fall wood smoke calling the boys inside for the winter. This year will be different. Preseason cold towels have been swapped for mittens. The team will play the elements from back to front.

“It’s kind of crazy,” said interim head coach Eric Stephenson. “Right now, we are playing football in February, which nobody’s done. It’s going to be interesting. Everyone is still dealing with the Covid pandemic and trying to wade through that. Honestly, the expectations and everything else, it’s staying the same. Just making sure we’re all on the same page and keep pushing forward.”

Swain County will be without head coach Neil Blankenship this season as he has taken a step back to spend more time with his family. The size of the shoes he is stepping into is not lost on Stephenson.

“I think it’s more a question of what hasn’t he done for the program,” Stephenson said when asked what Blankenship has done to elevate to football program. “You’re talking about a guy who pours his heart and soul into Swain High athletics. Football to every other sport you can name up here. He does it all, he’s just the guy.”

On the field, Swain the offense will start in the backfield with a returner under center and a fresh face at tailback.

“We’ve got our quarterback back, Damian Lossiah,” said Stephenson. “He’ll be a three-year starter and does a lot of great things throwing and running. We’ve got a running back, Carson Taylor, who has worked really hard in the offseason, so he’s going to play running back. We’ve got a few other skill guys who we are looking for big things from, one being Cam Blankenship, and another one returning from last year is Donnavin Groenewold.”

As for the schedule, Stephenson did not mince words when pointing out the most important game of the year.

Swain finished the 2019 season with an 11-3 record and advanced to the third round of the playoffs before falling to Mitchell High School out of Bakersville.